The LED lights have become your purse to manufacture all the purses.

Will do Let’s see what you need to do to build a circuit.

Circuit does not have to be worn with parse. It is a 10Mf 16V electritable capacitor used in circuits.

This capacitor has the puller, such as a + leg, the other – while connecting the legs, the capacitance circuit

If you do not have the opposite connection to the foot, Rakabe rackbay. Changing the value of this capacitor

LED lights will change the speed of the dancing speed.

Used in the circuits, the name of this parse is the Transistor C828 tangestor placed in this position on the right side, the middle ear collector,

The left side of the emitter, the tranzaster is shown in the picture two cistems. The Q1 will be shown in the diagram of this image. 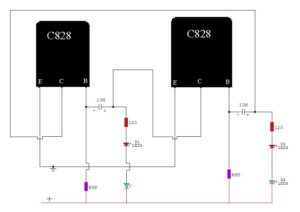 Circulars used in the circular 68K color code has been given to all the friends who do not know the registers well now and for them.

Take a look at the 120 Ohhus Register color code switches used in the circuits. Let us see the summary now.

Regarding the registers and capacitors with the transtrator, make sure that the connection is well done

Connection in this way. Let’s look at the following circuitry for those who understand this circuit.

Hopefully everyone can create the Sarakita. Bidr is one thing I do not care about because the LED lights but there is a pool in the legs

If the LED lights are inverted, the lights will not fire. So when we buy a new LED lamp, we will see the feet of the lights, one foot smaller

The other is tall. Connection will be done with LED light long legs Sarkit + vc (Progressive).