These tunes for all areas where electricity is more problematic.

Bangladesh’s current power situation looks like this tuning will be useful to everyone. If you look at the circus with a lot of mono joining then I think you can create it in the right place. Automatic Emergency Light When the light will remain off the auto system, the electricity will be flushed as soon as the electricity goes out. Many types of LED bulbs are available in the market to buy. The stone bulbs in low prices give more light. If it is made by hand, it is better to make it with a stone bulb. If you build the circuit correctly, the bulk connection can not be put in the right way, but the Sarakit will not work. 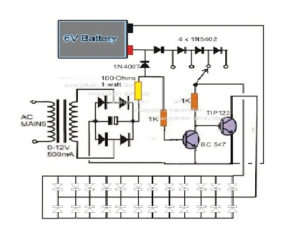 Let’s not be slightly familiar with LED bulbs. Each LED bulb has a puller + and – that’s why we first
The LED bulb’s legs should be well recognized.
Here are three images of LED bulb, shown in the picture that the captured friends could not understand
Let’s see the picture below with me

The LED bulb is just like this one foot tall and the other is a small, long ribbon (+) is a prototype other (-) negatives. If the legs are two equal, then + and – how do I understand
Let us now see the following picture
In this figure, see the inner part of the bulb. A large player is the small, large player, which means that the placement of the pillment is either (-) or negatives if the LED bulb is colorful, the inside part can not be seen if + or – keys
Let’s understand this. Let’s now see the image below
Look at the part that has been shown with the green arrow. Please note that the roulette vita is cut on one side, let’s look at another image and easily understand.
The cut part Negative is a projection. Hopefully there will be no problem with the bullets of the LED bulb. When there is a rectifier diode, and LED lamp in the circuits diagram, how do we understand which diodes and which LEDs are the same because they both look the same.
Let’s take a look at the picture
Well notice that the diagram and the LED lamp are the same in the figure. The picture that has two arrow keys, we can understand that this is the LED bulb. It’s not good to talk about LED bulbs, let’s get ahead
These are white LED bulbs. The middle two-color lamps of white LED bulbs look like the light of the tube lights
The other looks like 100w or 60w clear bulbs. Buy bulbs like your choice. Now let’s see the stone bulbs
The light bulbs more than the normal light bulb. LED can be connected with surchur with all the forces and can be used for cone shape.
Peralal connection can be easy for everyone but Shirey conakshash everyone is not able to come, so let us see the Shirer Connection
All LED bulbs or rocker bulbs will connect with similar images.
Let’s see today’s surchitart purse shoots
1K registrar two 100 Ohahs a 10 Ohms Eki.
TIP122 or TIP 121 or TIP120 will be used if any number is used in the circuit, two tranquets have been used, the other is BC 547
This is an electrodynamic capacitor whose values and volts are written on.
This is 6VOL battery which can be purchased from the market at 280 to 300 rupees.
It is the main circuit here that all the bulbs have been connected to the connection. If you see this circuit, then understand the problem and let’s make it easy to see the following circuit =
Four diodes in the upper row are used so that you can increase and decrease the lighting you like.
Now everyone knows whether or not. The night has been deep like it is today