Talk to your computer’s speaker box with the microphone and in no case the joy of the heart.

All the friends who will give the certificates today
In the village house, Chut cut at the Eid Ground, in prayer at the village, at the village house
Mike’s system does not have much time in that zone as the mic, as your mic
The computer box can be used very easily. Moreover,
You can use any of your antennas and
There is no run in Rome Let’s not see the circuit.
You need to buy a microphone to talk about the job you need to do. After that the C9014 will have to make this circuit with a triangle.
Let’s not see the following circuit.
After creating the C9014 Transjordan Sarquitta, make the connection to the microphone as shown in both its pictures.

e of macrophone on the sarket’s ground)
Put the input of the computator speaker box on the right-hand cell with the inserted down on the right side.
Here the computor box has been shown how to do connections which are difficult to understand. Do not look down on the circuit
Now let’s hear the soundbox emam in the mosque that wears the kudba on Friday. Many times when you talk to me at the show 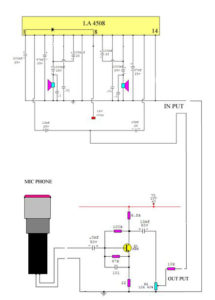 The wafer amplifier of the mosque becomes hot due to various problems. So the low watt appifiers to speak for the most
If it is good to use, let’s not make an amplifier of low watt by hand.
Create an amplifier by itself by viewing the diagram with the LA4808 IC. This amplifier can be played out of the 40k out of the Batman mobile.

Let’s talk about the mosque’s microphone.
Make a look at the sarikit shoots and understand if there is any issue