How to make USB communication with microcontrollers and its details.

I will try, as much as I know what to share. I hope those newcomers will be able to successfully communicate with microcontrollers via USB communication. I’ll try as much as possible. Please forgive me if I have something wrong.

I think USB serial communication is very good. Because there is no problem with interfacing, as much as RS232 Serial. Speed ​​and much better.USB 1.0 Low Speed-1.5Mbit / second & High Speed ​​-12Mbit / second. This will increase the speed of the USB version, the speed increases. USB5.0 speed 5Gbit / second It’s called SuperSpeed. If you would like more details, please visit Wikipedia’s link.

Anyway, come back to the original words. We support the USB 1.0 that Mikrocontroller will use. Now you can ask questions about when High Speed ​​and when Low Speed When the clock is 6MHz then there will be Low Speed ​​and Clock when 48 MHz will be High Speed ​​.. We will try to communicate at High Speed. But the Clock pulse of 48 MHz is fairly noisy and is more expensive. So we will use the PIC 18f2550 Microcontroller to overcome this problem. Because Microchip companies provide some of their series within the microcontroller, the internal PLL circuit, and PIC 18f2550 microcontroller’s internal internal PLL circuit. 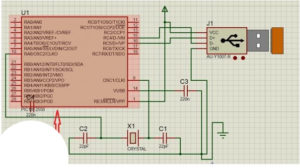 Now open MikroC, click on New Project. You will see the following.

After that, notice the picture below.

1 -> We know PLL circuit only takes 4MHz clock input. So the crystal will divide 12MHz by 3, which will then be converted to 96MHz. If the crystal is 4MHz, then do not take anything.

The function of this function is to enable USB 1.0. Which will retrieve the received data on the receivedata and send the senddata data, via USB.

This function receives the data. Returns 0 if return receives fail, and if not return the character.

This means that, continuing to receive the data as long as the data has not been received.

This function returns data. Returning 0 returns if failing, and if not, returns the number of data that has been sent.

This means that continuing the data shedding is as long as the data is not sent.

This for loop will rotate 0 to 63 times, and the data we receive will send it back to the host, enter the senddata.
Descriptor File Addition Now

Descriptor File: This file will bear the identity of your Microcontroller. The main thing is that this file is your device’s

Manufacture will carry the Product ID, Vendor ID, and introduce the device to the PC.

Let’s show you how to create Descriptor File.